One of the highlights of my travels through eastern Europe (which comprised of spending two to three weeks traveling through Austria, Hungary, Slovakia, Czech Republic and Poland), was spending a couple of days in the serene and beautiful town of Cesky Krumlov, located in the region of Bohemian, Czech Republic. Unfortunately, like many beautiful old towns in Europe, Cesky Krumlov has become somewhat of a tourist hub, with most tours of the region making a stop here. However, I was fortunate enough to visit Cesky Krumlov during the springtime, as I could imagine that the quaint and quiet atmosphere of the town, which is what made it so appealing to me, would be spoiled by the hoards of summer tourists, flocking to marvel at the town's well preserved baroque architecture or to participate in the numerous outdoor sports available nearby, including white water rafting along the Vltava River or horse riding in the surrounding countryside. 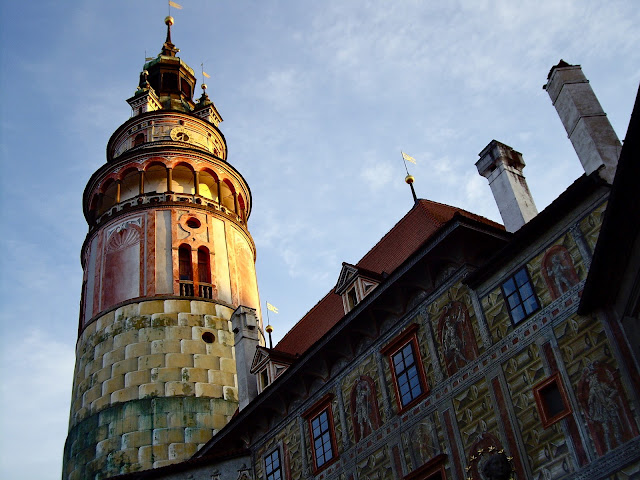 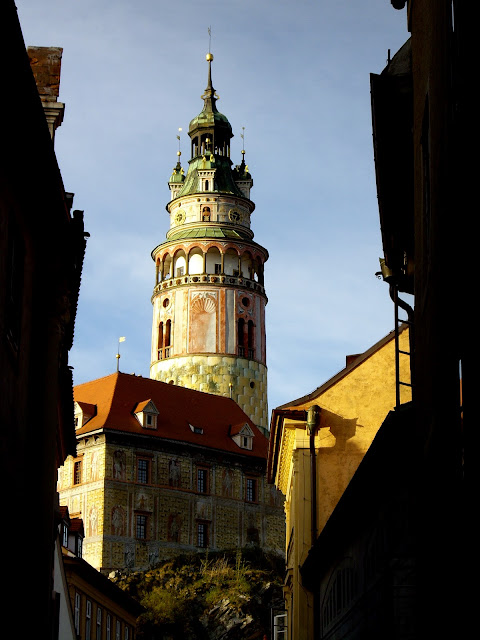 As I walked down the cobble-stoned streets of Cesky Krumlov, I felt as though I was no longer in the 21st century. In the old town centre, there are no tarred roads and no modern architecture to be seen. It seemed as though little had changed in Cesky Krumlov over the past few hundred years, even the pastel coloured, medieval styled residential buildings of the town appear to be well maintained, as though time has stood still.

In the daytime, Cesky Krumlov radiates with colour and life. Locals do their daily shopping in cute little artisan grocery stores, riding bicycles home laden with fresh baguettes and seasonal fruits and vegetables. The streets are full of children playing and small tourist stores display local arts and crafts. But as night falls, the atmosphere in the town drastically changes. Not necessarily in a negative way, the town feels quite safe at night, but once the sun hides its face, there is a somewhat eerie and ghostly feeling about the town, as if it it haunted. The streets are desolate and dimly lit by street lamps. Cats scurry from one dark alley to another, trying to remain the the shadows. The only sounds that can be hear is the faint muffled music from hidden away bars and restaurant, and the rush of the swelling Vltava River. It is little wonder that there are so many ghost stories circulating about the town. http://www.ckrumlov.info/docs/en/mesto_histor_povleg.xml 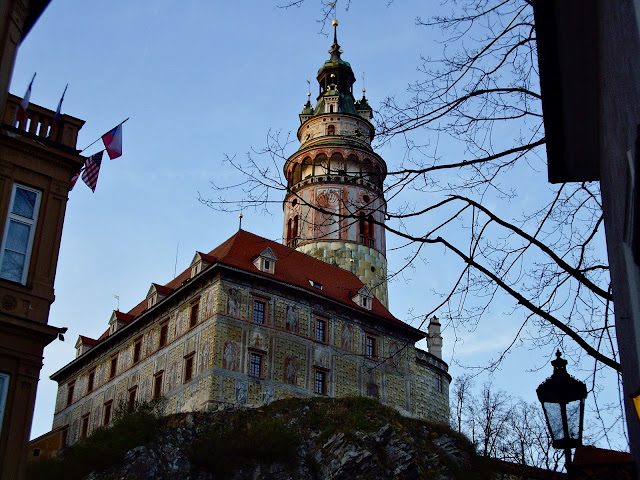 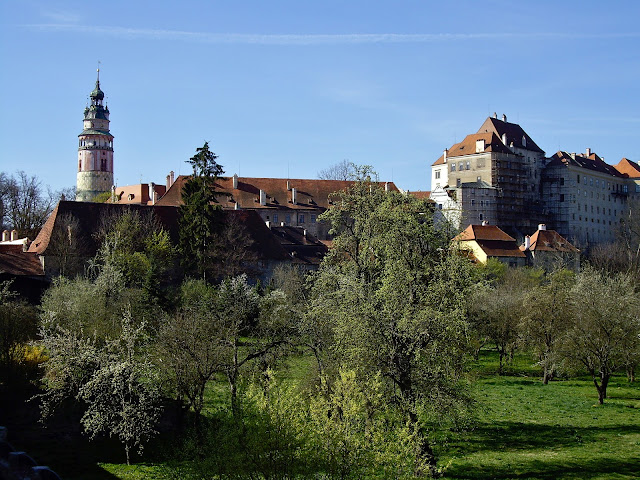 The highlight of Cesky Krumlov, and its claim to fame, is the castle. The castle tower, the most striking monument of Cesky Krumlov, dominates the town's skyscape - making it rather easy to locate the castle complex. Upon nearing the castle, I was rather intrigued by its exterior decoration. What struck me was the use of pastel colours and painted faux architectural features, which are quite graphic, three-dimensional and tactile in form. I am at a complete loss at how to categorise this style of architecture, as I haven't seen anything like it before. However, it makes for an impressive piece de resistance of the town.


Entrance into the castle complex is free, although there are small charges to enter certain parts of the castle, such as the tower for example. The complex is fairly large, boasting many rooms, as well as an expanse of parkland and gardens, including a lake and outdoor theatre, so I'd recommend setting aside two to three hours to see it properly. A note of warning, animal rights activists may have something to say about the bears in the dry moat which surrounds the castle. I'm not quite sure what their purpose of being there is, if bears were kept in this moat in the past, or if its some sort of ploy to attract tourists. Either way, their sparse concrete habitat looks rather stark and depressing.
Some interesting tales and legends about the castle, which I find rather fascinating:
http://www.castle.ckrumlov.cz/docs/en/zamek_oinf_povest.xml 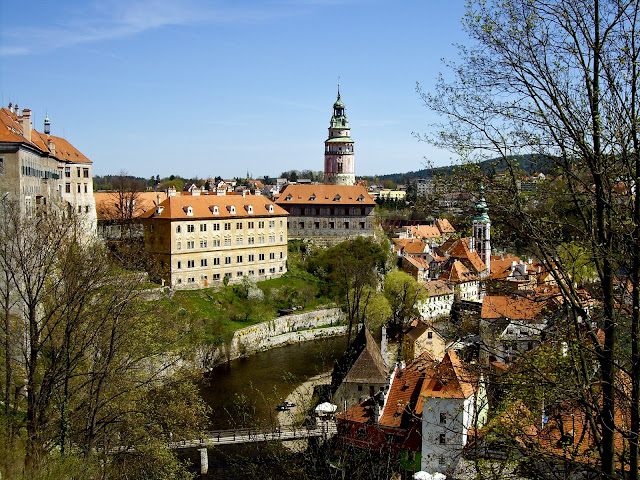 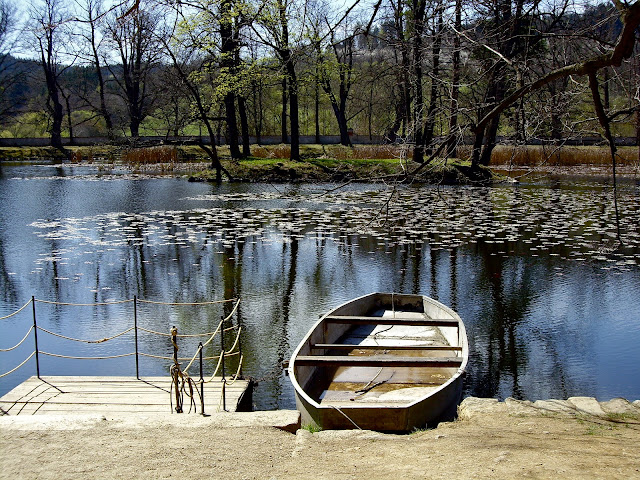 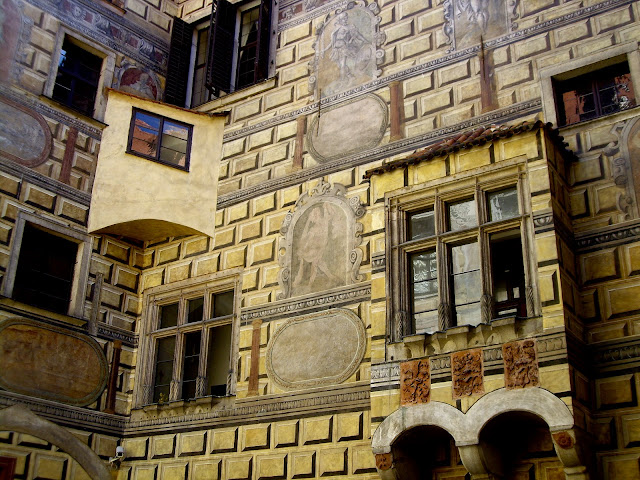 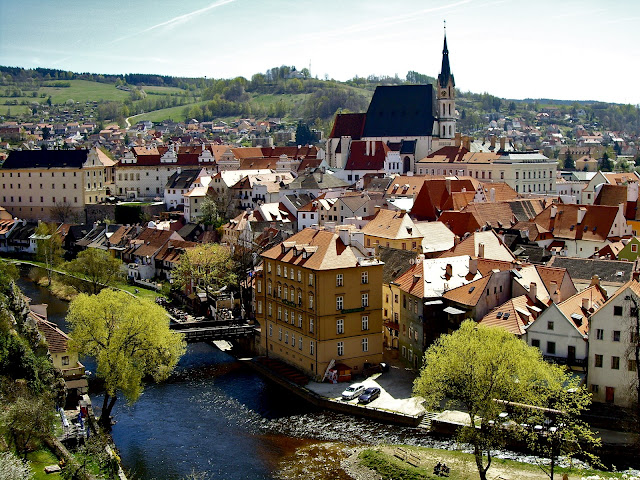 On my final afternoon in Cesky Krumlov, took a little walk into the farmland surrounding the town. I happened to stubble across a path and decided to follow it, passing a number of people who were also enjoying the spring sunshine. As the originally well defined path slowly faded into tuffs of grass and gravel, and then into open grassland, I spotted a little chapel on a hill, and decided to cut across the nearby meadow to reach it. Once I reach the peak, I was greeted a spectacular view onto the town below (the chapel can be see in the photograph above, in the center of the horizon line, surrounded by trees). Although it was an exhausting hike, climbing over stone walls and pushing through trees and shrubs, not to mention the incline of the hill, like most things which require a great deal of effort, the reward (the view) at the end was worth it. 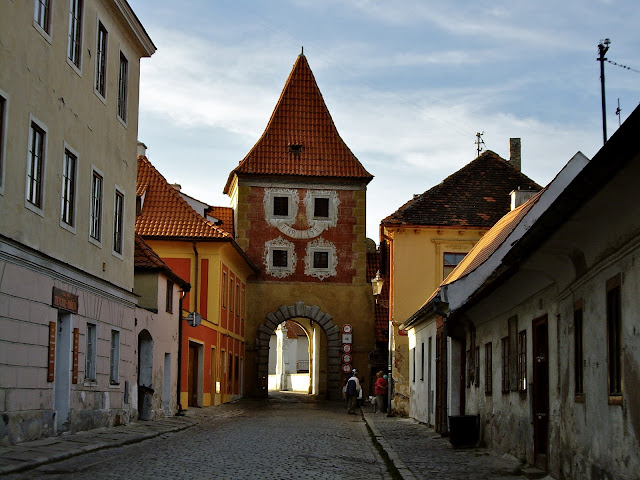 During my stay in Cesky Krumlov, I stayed at Hostel 99, which is located at the entrance of the old town, as you cross the bridge near the main bus stop. It is a converted and beautifully preserved 14th century building, with cellar like rooms downs stair, boasting thick stone wall and beautiful arches. The attic rooms are just as impressive, with distressed timber floor and exposed timber ceiling beams. I remember the hostel owner mentioning that the building once housed a hospital and lunatic asylum, which sent a bit of a chill up the spines of a few of my fellow travellers, as well as provoking a number of ghost stories after the lights went out. However, it was one of the most comfortable, pleasant and interesting hostels I've stayed in. 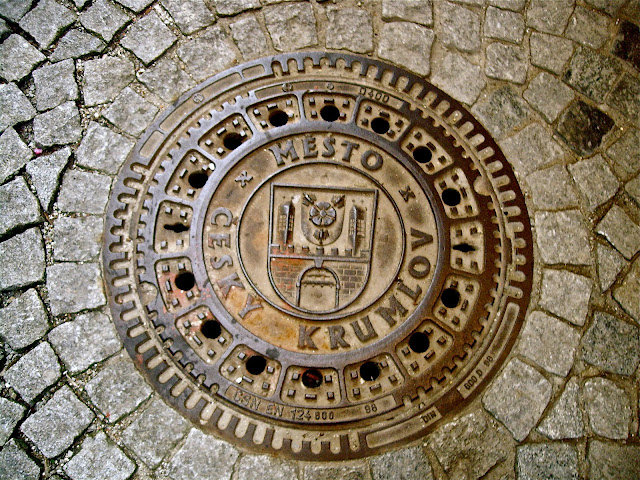 J.Spadina (MalaKretova)
Life's one big adventure. So just enjoy it.